I have gone back and have been inserting pictures on previous posts. These pictures were taken in this last month of the farm that my dad purchased in 1959. If there were any pictures taken in the early years that I am talking about, they have been long-lost or destroyed. The house was built in summer of 1960 and the gambrel style red barn was built in 1962. In the pictures a barn with a red roof can be seen in the very back of the ranch.

The tree line in the back is on the south side of the bayou that runs from Faulkner Lake 1 1/2 miles to the west. There was an area about 80 acres on the north side of the bayou divided into 2-40 acre parcels. My dad grafted over 80 wild pecan saplings with Stuart grafts on the 40 acres on the east end, with my 12 year old help. By the mid 70s they were producing between 700 and 1000 lbs of pecans a year.

In the front yard can be seen several pecan trees. We planted 6 young trees in the front and 3 on each side of the house in 1960. But as you can see by the picture, age and storms have gotten to several of them. On the front of the yard my mother planted Hyacinth bushes, that I had the privilege of keeping trimmed. My mother also had a flower bed on the left side of the driveway for many years. It was one of her passions. 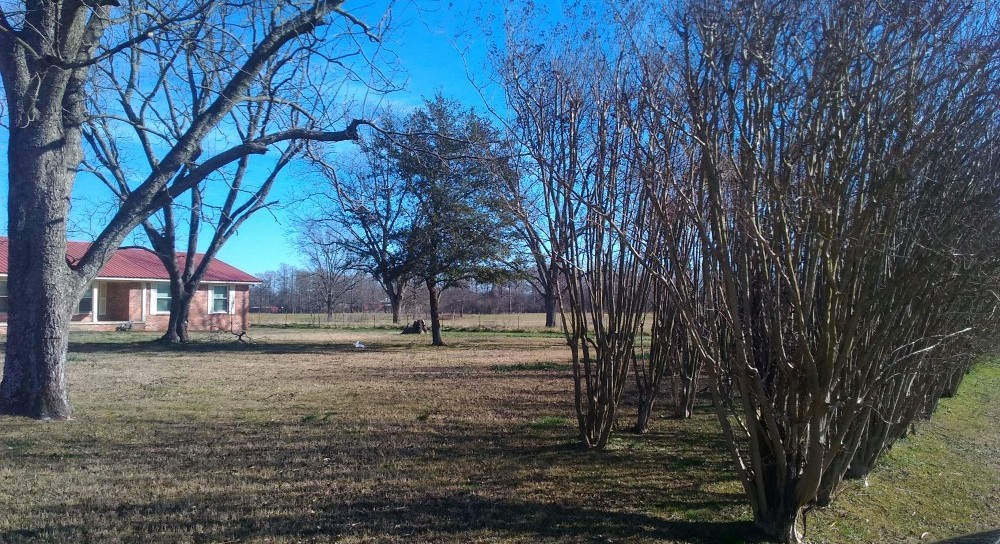 When we sold the ranch in 2008 the new owner removed many of the fences that we had erected back in the 60s. And with the cattle he is running he doesn’t have the need for so many fences. You will notice a tree in the back yard by the bar-b-que grill which is a cherry tree. The two trees on the left side of the drive are Catalpa trees. I would use the Catalpa worms for fish bait during the summer. The fence on the side of the yard before it was moved to the west was only 10 feet from the driveway.

Directly behind the bar-b-que grill about 200 feet was where the chicken pen and my tack house with the hitching rail was found. They were also torn down by the new owner. And the first barn, the hay barn for many years, can be seen in the distance.

Here it was, April 1968 and still had a month and a half of school left. But there was a time for work and a time for play and now it was back to work. We would normally try to start cutting hay in mid to late April where we could get two cuttings a year from 7 pastures. And now I had 3 different horses to ride. Things were to get very busy.

There was not a lot of time to get riding in during the week because we cut hay on a 3-day schedule. I would usually get home from school in time to take over from my dad that started cutting earlier and I would cut until almost dark. The next day it would lie in the field and dry. The third day either my dad or I would rake and then we would bale. I was always on the hay wagon which we pulled directly behind the baler. And we would bale until finished or till dark.

I had to put off my riding until the weekends, especially on Sunday afternoons. By mid May I would have a suntan and was asked by many at school if I had been to Florida for the weekend.

Before Squaw was born and when I was riding Peela and Pierre, I had set up 3 55 gallon barrels for barrel racing. We had progressed well, even though I had not been able to ride in any rodeos. Now was the time that I would start working Squaw on the barrels. Barrel racing is a rodeo event in which a horse and rider attempt to complete a cloverleaf pattern around preset barrels in the fastest time.

We did not have an arena and the corral was not big enough to set the barrels up in so I had a place in one pasture where I could set them. The only challenge was that the grass grew faster than my training with the horses progressed so I would have to keep the grass mowed down.

By the middle of May, we had 4 of the smaller pastures cut and baled so I was able to ride a little more after school. I started doing something then and got into the habit of doing which I followed up on 15 years later when I lived in Montana. That was rotating my horses. I had 3 to ride so I would take turns on each one of them. I also would not ride 2 different horses in the same day. The amount of miles I rode and the amount of training I did would not be enough to even begin to be a strain on the horse.

Junior year of High School is over. Senior year will start in September. Time to make the most of the Summer of 1968. The only summer job that I had was the same one that I had had for the last 5 years. Working on the farm. I had a very generous father who paid me a salary of $25.00 per week. And that $25.00 per week went into my savings account. I was already making plans for college.

This is one way that I look at the years on the ranch. It was a working horse and cattle ranch. We did the work. hahaha. We always took our vacations away from the ranch though. Looking back today, it would have been a lot of fun having friends from school involved with the ranch.

SUMMER 1960 Before we moved in late summer of 1960, my dad purchased a Tennessee Walking…

Spring 1968, the end of my Junior year of High School. If I remember correctly we picked up Squaw…