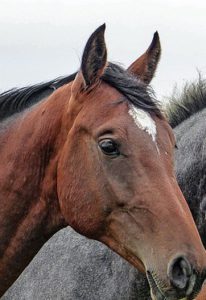 Spring 1968, the end of my Junior year of High School. If I remember correctly we picked up Squaw from the trainer in April. Returned home with her and took her out of the trailer. Same trailer we took her to training in.

Several years before, my dad, being a home builder, found a trailer frame and built the body of the trailer. 14 feet long, 6 feet wide, sides 7 feet tall. No partitions inside. The tailgate hinged on both sides and a center gate for loading cattle from a chute. Built for hauling cows and calves. He would not spend the money on a single or 2-horse horse trailer.

So when the horse was in the trailer their halter was snapped to a heavy rope to keep them from milling around the trailer. Coming back from the trainer Squaw fought the rope most of the way home. Happily she did not injure herself. This may have been the reason also that led to a future problem that I would have with her.

Behind the house next to our chicken yard we had a small storage house 10 x 10 with a peak roof. This was my tack room. In front of it we had built one of the old time railings to tie horses to like you see in the westerns, outside of the stores. It was where I would tie my horses. So the challenge of tying Squaw with a rope had started before now. She did not like to be tied. But the rope was so heavy she could not break it.

This caused a bit of a challenge in the future when I was out riding and wanted to get off and walk to a bit and leave her. Well the first time I did she broke the reigns while I was away. Ha Ha. And from that point on I had to work with her until I finally was able to just drape the reigns over the fence or a bush and not tie it at all. Surprisingly she was always there whenever I came back. At that time I did not know what horse hobbles were.

It was Saturday afternoon. And if I remember correctly it was early April. Still had some school left. We had already started baling hay and the pasture beside the house was done. I wanted to let her get re-acclimated to her home so I grabbed a lead rope, attached it to her collar and took her for a walk talking to her. I wasn’t aware at that age as I am now of the communication abilities between man and animals.

Taking a brush with me so I could brush her coat. As we walked I talked, she listened. Who else would she listen to? I was the only one with her. Looking back now I can say my filly had been with another man for a week and now she was back where she belonged.

The trainer had a large circle about 300 ft in diameter that he had trained many horses on. When we had returned with Peela in the summer of 1965, I hooked the tractor to the disc and disked a 300 ft circle in the pasture. So this would be my warm up riding area and had used it with Peela and Pierre.

This was where our walk took place that Saturday afternoon. Imagine if you will, a fifteen-year-old cowboy, leading his horse around a huge circle, explaining to her all of these things that they were going to do together in the coming years. Stopping occasionally to brush her and continue.

A couple of years earlier, a family built a house with 30 acres 1/2 mile down the road to the east of us. Two boys, a younger daughter and twin daughters. Kyle, the oldest son a year younger than me. and I had become good friends. His parents bought him a horse a year after they moved in. It was a good horse about 10 at the time and Kyle and I always went riding together. We had ridden many a mile together by this Spring Saturday.

I walked back over to the tack house and hooked Squaw to the hitching rail in front and ran to the house to call Kyle to tell him that we had brought Squaw home. To get his horse saddled and come on down. He was anxious to see her too since we had shared a lot in the last year.

I then proceeded back to the tack house to get my horse ready. The tack house was about 250 feet from the gate at the house and when I opened the gate I could see Squaw already trying to break free from the rope and hitching rail. Walking up slowly I started talking to her trying to calm her down. Assuring her that all was going to be OK. It took about 5 minutes to get her calmed down but this was the beginning of the tying challenge that I had with her for several months.

I had her all saddled up. And I will admit that I was a bit apprehensive. She kept watching me, looking me over with those beautiful eyes. I had been using spurs with Peela and Pierre for the last 2 years and decided that I would not need them, at least not now.

Came out of the tack house and walked over to her and unhooked her from the hitching rail. Grabbed the reins and walked away from the tack house. About that time Kyle arrived and was at the gate. It was now or never, I thought. Stood there at her left side, grabbed the pommel and swung myself into the saddle. I could feel her stiffen up and then I moved and she let out air. All was well.

Started talking to her and as I did nudge her along. Our first ride was going to be a good ride. Turned and walked her towards where Kyle was and saw my mom and dad and sisters on the back porch watching. Life was great.

SUMMER 1960 Before we moved in late summer of 1960, my dad purchased a Tennessee Walking…

I have gone back and have been inserting pictures on previous posts. These pictures were taken in this last…